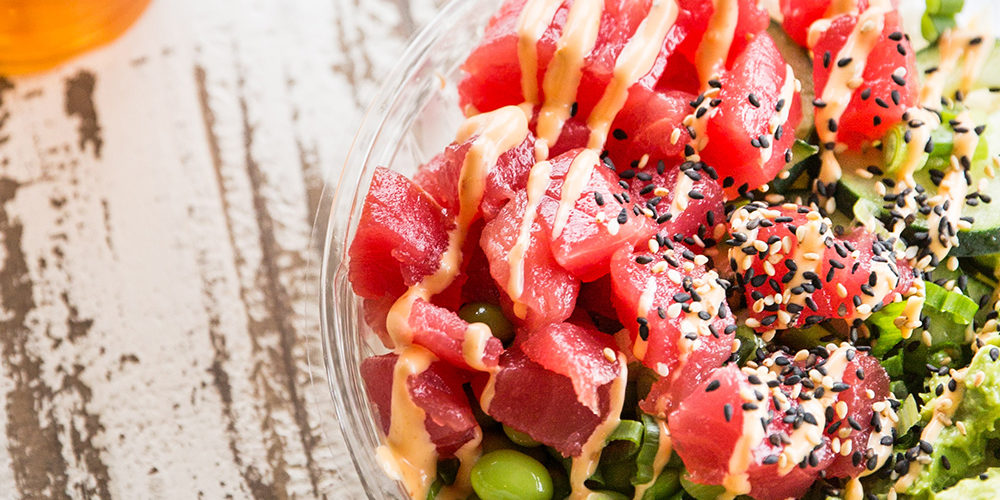 Aside from miles and miles of white-sand beaches and world-renowned surfing, one of the biggest attractions of Hawaii is the food scene. Not surprisingly, many quintessential island-style dishes include fresh seafood, but perhaps one of the most beloved in Hawaii is the poké bowl. Today, restaurants all across the world are serving up their own takes on this traditional Hawaiian meal!

“Poké,” pronounced POH-KAY, means “to cut crosswise into pieces” in Hawaiian, which is how the fish is prepared in a poké bowl. It’s unclear as to where the dish originated, but the present form of poké became popular around the 1970s. It used skinned, deboned, and filleted raw fish served with Hawaiian salt, seaweed, and roasted, ground candlenut meat. This form of poké is still common in the Hawaiian islands.

Traditional poké is a simple combination of cubed raw ahi with a bit of soy sauce, however, poké doesn’t necessarily have to be composed of raw tuna. Other varieties of poké include octopus, tofu, shrimp, scallop or salmon mixed with chili paste, limu (vitamin-packed algae), crushed kukui nuts, avocado, sesame oil and green onions. While poké is delicious by itself, the ever-popular poké bowl includes white rice and is often accompanied by a generous amount of fresh veggies, sesame seeds and seasonings.

Poké can be served raw, marinated or fried, and can be found everywhere from food trucks and cafes to casual and fine dining restaurants.

A Wave of Popularity

Beginning around 2012, poké became increasingly popular in North America. From 2014 to mid-2016, the number of Hawaiian restaurants on Foursquare, which includes those that serve poké, doubled.  These restaurants serve both traditional and modern versions of the dish. The modern version is sometimes called poké bowl, and has the ingredients arranged in a grouped way rather than mixed. Variations may include avocado, ponzu sauce, teriyaki sauce, mushrooms, crispy onions, pickled jalapeño, sriracha sauce, cilantro, pineapple, or cucumber.

Unlike traditional Hawaiian poké, the mainland style is typically not pre-marinated, but is instead prepared with sauces on demand. Contemporary poké restaurants like Poke Bros are mostly—but not exclusively—fast casual style restaurants where the dish is fully customizable from the base to the marinade on the fish. They may use other seafood but ahi tuna tends to be the most popular.

Poke Bros offers a build-your-own-bowl style of ordering a poké bowl, as well as our most popular Signature Bowls on demand. We offer both raw and pre-marinated versions of Salmon and Tuna to cater to all tastes and preferences. If you haven’t tried this amazing island delight, we invite you to visit your nearest Poke Bros location or order online at our website!

Browse our full menu of ingredients and order your next poké bowl online for easy pickup or delivery. Find your local Poke Bros location on our map!